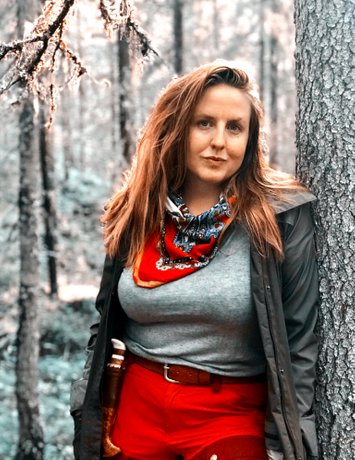 Stina Stoor was born and raised in the tiny village of Balåliden, deep in the countryside of  Västerbotten county in the north of Sweden, and this is where most of her stories are set.

Her literary breakthrough came in 2012 when her short story För vår del (As For Us) was awarded the Umeå Short Story Award by a jury comprised of, among others, PO Enquist.

Her first book, Bli som folk (Growing Normal), followed in 2015. Bli som folk received Katapultpriset (the Swedish Authors’ Association’s award for best debut of the year), Borås Tidnings Debutantpris (Sweden’s largest literary debutant award) and Samfundet De Nios Julpris (the Christmas Prize of the Society of the Nine), and was shortlisted for Augustpriset (the most prestigious literary award in Sweden) with the justification ”Bli som folk is nothing short of a renewal of the Swedish art of the short story.” Bli som folk was the first collection of short stories ever to have been nominated!

Following this success Stoor vas invited to do the prestigious radio show Sommar i P1, where she talked openly about her childhood. And Stoor’s hour and a half on Sommar i P1 was so well received by the radio listeners that by voting for her they gave her the honor of airing her own Vinter i P1 on Christmas Day 2016.

In August 2017 her short story Monte Carlo was published by Novellix as part of a “Västerbotten-box” together with stories by legendary authors from Västerbotten Sara Lidman, PO Enquist och Torgny Lindgren. The story Hundhålen (Dog Holes) appeared in the collection Friendship and warm paws on Brombergs in March 2018, and in April that same year Albert Bonniers included her short story Gåvan (The Gift) in its collection of the best Swedish short stories over the past 200 years under the title Svenska noveller från Almquist till Stoor (Swedish Short Stories from Almquist to Stoor).

Stoor has since 2017, at uneven intervals, been contributing with her observations and personal thoughts on current events in essays and columns for Swedish newspapers.

In anticipation of finishing that elusive second book, for adults, Stoor is in August 2020 very excited to be publishing a children’s book, Halsduken (The Scarf) on Rabén & Sjögren. Halsduken is beautifully illustrated by Johanna Häger.

Stoor’s stories have been translated to Belarusian, Czech, French, German, Kurdish, Norwegian, Russian, and Turkish. Bli som folk was released in Norwegian (Bli som folk) by Gyldendal in 2017, and will be released in French (Sois sage : bordel!) by Editions Marie Barbier in January 2021.

Stina Stoor has two daughters. She is still living in her childhood village Balåliden. Mostly. But after remarrying with Ambassador Peter Ericson also in Moscow, and since 2019 at The Swedish Palace in Istanbul.